Often times we are making tough decisions at the WR or Flex spot on our rosters. This tool is a great tie breaker. It tells you which guys have fantasy production that is most reliant on scoring a touchdown. Touchdowns are hardly predictable, so in a close call it’s always safer to go with the guy who produces naturally with minimal reliance on scoring. When those type of fantasy players score, it’s just a big bonus.

A.J. Green relies on touchdowns just a bit more than average. This is great news for the #1 fantasy receiver. His value should hold strong.

Brian Hartline’s rank is boosted by one big performance. He is still a solid start every week. The guy get his targets and yards. You can play him as a #2 but he is an amazing #3 fantasy WR.

Mike Wallace, Julio Jones, and Steve Johnson have been scary dependent on touchdowns.

Malcolm Floyd is a solid #3 WR.

+Chart 1 is sorted by total fantasy points on the season
*Blue indicates a promising touchdown dependency ratio. Blue is good.
** Red indicates players who have been overly touchdown reliant. Future inconsistency is predictable. You might consider trading guys in red if they had a good game last week. 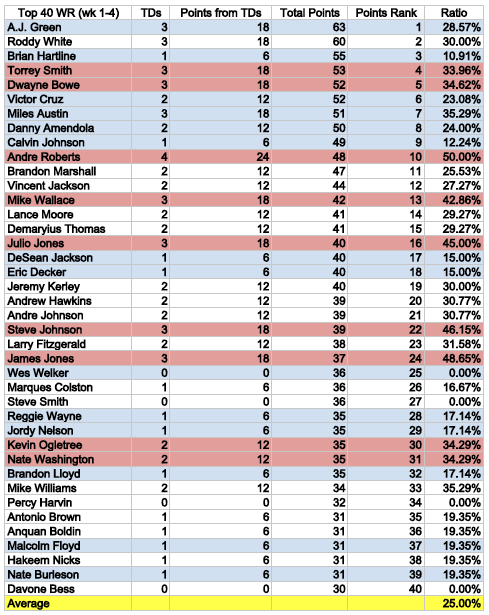 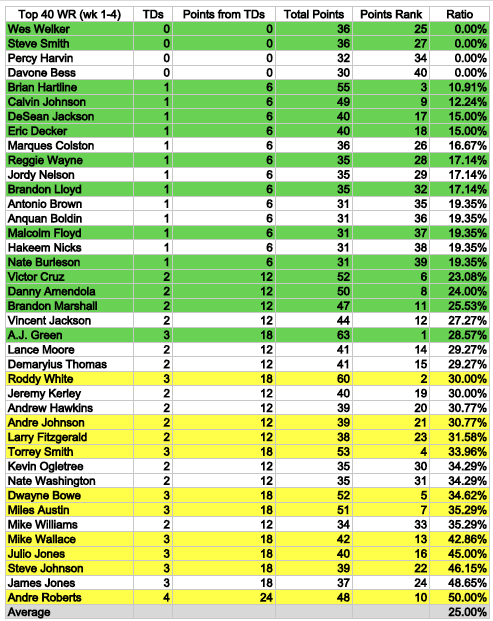