Could We See A Hasselbeck / Holmgren Reunion?
Alex Dunlap, Rosterwatch.com 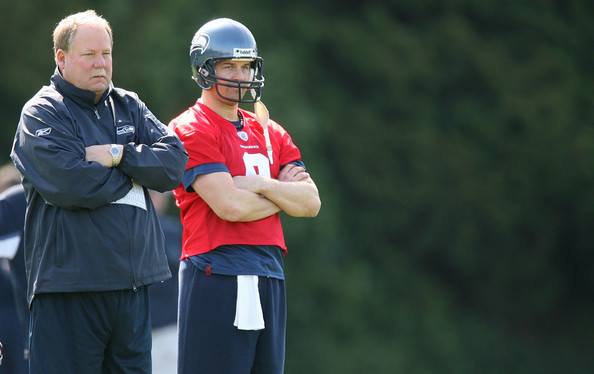 Well Browns Fans, who knows at this point, really. I’ve spoken with both Vic Carucci and Mike Mayock about your specific situation, and I still don’t think anyone has it quite figured out. The Browns weren’t willing to pony up like Redskins owner Dan Snyder did for Robert Griffin III. They showed no interest in Peyton Manning (I’m sure he was devastated). They have said they are going to let the Matt Flynn Derby take it’s soapbox to Seattle if those West Coast quacks want to pay a QB $2 million per completion thrown in 2011.

Here is what we know:
1) Mike Holmgren has said publicly that the Browns WILL be signing a QB this year. Not as an indictment on the position, but as a part of his managerial “bullpen” mantra regarding QBs.
2) Colt McCoy has not been replaced (yet) but is on the shortest leash on any QB in the league. You can’t start for a year and a half and be winless against your division in the NFL and feel like you have any job security.

So lets just pretend that Peyton Manning decides to come home to Tennessee and signs with the Titans. If the Browns have not made a move by then, you might as well put a bow on Tennessee QB Matt Hasselbeck’s big, bald dome and send him express straight to Mike Holmgren in Cleveland. He knows the system, and that is all the system needs. The Browns have drafted brilliantly as of late on defense, bringing in 4 starting-caliber players in just two years. That is ridiculous. This draft, it is the sentiment of most that Browns Head Coach Pat Shurmur (who is a west-coast offensive specialist) will get his turn to pick some offensive weapons. Lord knows the Browns need them.

Imagine a draft where QB need was out of the way for Cleveland. It would be like taking candy from a baby. Peyton Hillis is gone, so you replace him with the most sure-fire RB prospect since Adrian Peterson in Trent Richardson at pick 4. You can then target value at pick 22, which will most likely be WR Kendall Wright. All to be managed on the field by the ultimate bus driver in Matt Hasselbeck.

The sentiment in Cleveland was that the fanbase could use a “splash” or a spark with a guy like RG3. I’ve said from the beginning that I hated that fit. I feel like this is a way the Browns could make a splash. Like so many other things, though… It depends on Peyton.