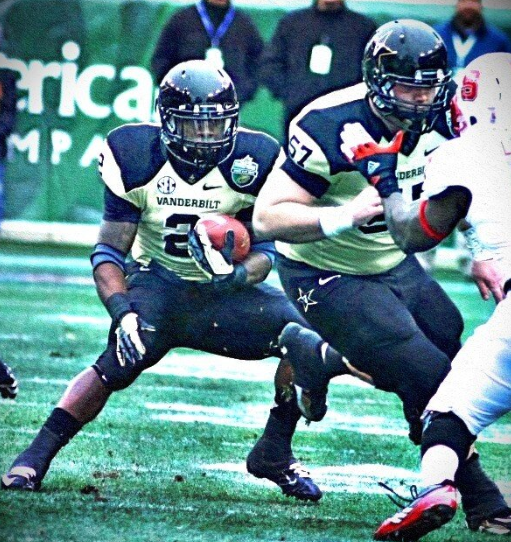 I’ll admit, I’ve probably watched more Zac Stacy video than any other running back. My first impression of Stacy was that he was a poor man’s Doug Martin. The more video I’ve watched, the more ready I am to remove the “poor man’s” label. Built with a strong lower body, he displays unnatural power for his size. He uses his blockers well and has a great ability to make himself skinny through the hole and to adjust his body through traffic.

Stacy has tremendous toughness.  I seldom cite stats in player evaluations, but Stacy led the SEC (regarded by many as the toughest conference in the country) in 2011 with a 5.94 yards per carry. He picked up 1193 rushing yards on 201 carries while playing without a sub-par supporting cast. Moreover, he came very close to repeating these stats in 2012.  As negatives, his speed and agility are only average so he is a mediocre outside runner. Stacy lacks great balance, and he is frequently tackled by defenders from behind or from the side.  Stacy is flying well under the radar and may be the most underrated prospect of the draft. Some team is going to get one hell of a football player.

Zac Stacy is a powerful spark plug of a runner who has no problem getting in between the tackles. He should flourish behind an improved offensive line in the Rams’ inside zone power scheme. Steven Jackson has gone to Atlanta and while the organization has high hopes for Pead, he was consistently disappointing when given chances as a rookie last season. Daryl Richardson is not a serviceable feature back in the NFL, either. If the Rams do not bring in a veteran runner in free agency, Stacy could be one of the biggest early contributors of all fantasy rookies in 2013, thanks to the situation he currently finds himself in among a seemingly (and suddenly) loaded offensive attack.