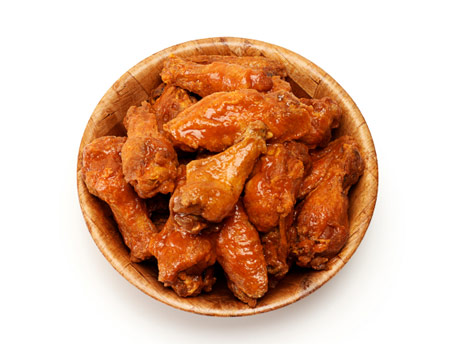 Super Bowl Sunday is America’s 2nd-largest food consumption day behind Thanksgiving. One holiday is to celebrate food as a symbol of peace and thanks between Native Americans and the people who would eventually murder them. The other celebrates 106 over-paid athletes, two “billionaire boys club” owners and a circus freakshow of idiot media. Gotta love it. On Thanksgiving we eat Turkey, on Super Bowl Sunday, we eat Chicken Wings.

An estimated one in five Super Bowl watchers will eat chicken wings during the game. One 6-wing serving is about 450 calories and 30g of fat on it’s own without any dipping sauce like bleu cheese or ranch. This amount represents enough chicken wings to make two circles around the earth. (If we weren’t all such lazy fat asses)

On a side note, the single food that is bought with the highest frequency on super bowl sunday in comparison to its normal level of consumption is carrots. The nutrient-packed snack vegetable sees consumption increases of nearly 30% on Super Bowl Sunday as opposed to a normal Sunday among Americans, due to being used as a side on chicken wings platters and a staple on veggie trays.

30.4 Million bags of chips will be brought to parties by dudes who “didn’t know what else to bring.”

71.4 Million pounds of avocados will be sold to make Guacamole.
(Unofficial Stat: Half the people buying avocados will believe their guacamole recipe is the best on the planet.)

49.3 Million cases of beer will be sold. That is enough beer that if opened up and poured, would fill up literally half of the indoor stadium that the game will be taking place at. This will result in 1.4 Billion trips to the bathroom during the game. (58% of Americans say they would rather go “during the game” so they don’t miss the commercials.)

4.4 Million pizzas will be ordered. (Only counting the big national chains)

Super Bowl Sunday is America’s number one day for people to have parties at home, recently eclipsing New Years Eve for the distinction. Fans at the actual game will eat over 5,000 pounds of hot dogs.

Antacid Sales at 7-11 go up around 20% annually on the day after Super Bowl Sunday.