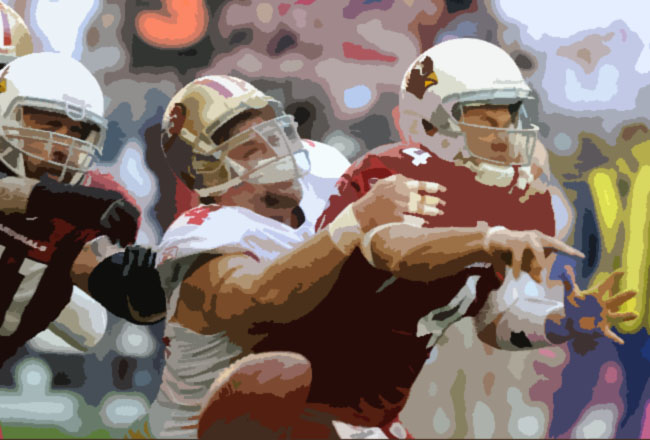 The Arizona Cardinals are in a quandary. You know things are bad when even the Trashman thinks it stinks.

Apparently they’re paying 65 million bucks to the wrong guy. QB Kevin Kolb got the big money coming out of Philadelphia a year ago to run the show in Arizona, and you don’t get paid like that to sit the bench.

But try as they may to keep him on the field, the coaching staff may have no choice but to start the player that gives them the best chance of winning. Right now, that appears to be John Skelton. The third year slinger from Fordham, where he holds no fewer than six school records including passing yards (9268) and touchdown passes (69), is having the better camp. Kolb threw a pick in his first toss of preseason action, and was soon after… smeared.

Skelton, however, had an impressive preseason opener against New Orleans in the HOF game on Sunday, in which he led a 90 yard touchdown drive against the Saints’ first team defense.

The lesser of two evils (neither prospective starter is going to the Pro Bowl any time soon), Skelton often shows more resolve in the pocket and has a better arm than Kolb. According to some sources, he has even won the locker room over with his commanding attitude and work ethic. While there may be little truth to the rumor, it would take little convincing for me to believe it considering what I’m seeing out of camp.

If you have already, or plan to, draft one Arizona’s unlucky receivers this season, you should hope and pray Skelton wins the quarterback battle. If the contest is close, Kolb will get the benefit of the doubt as he is the money man, so here’s hoping Skelton continues to flourish for fantasy sake.