Much like Byron Lambert did for the running back position, I decided to put together a point distribution chart to track fantasy points of the top 20 or so wide receivers.

I included 22 WRs in the chart, those receivers have played at least 25 games the past two seasons. I also included two of the top ranked WR at the bottom of the chart, Vincent Jackson and Andre Johnson, both of whom have played less than 25 games.

Here are my findings: 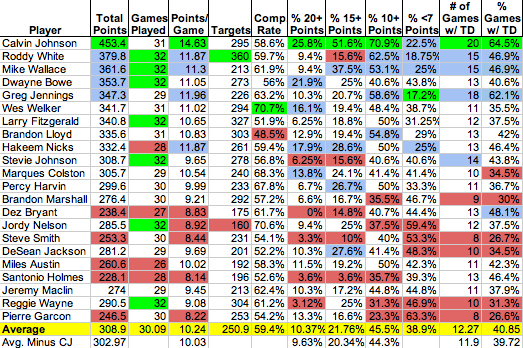 Calvin Johnson
Calvin Johnson is just a beast, plain and simple. Over the past two seasons, he has averaged 14.63 points per game, while no other WR has averaged more than 12 points per game. In about 25% of his games (or four games a season)  he will put up over 20 points, which is quite remarkable. Johnson is the top WR in every category besides % of games under 7 points. In 22.5% of his games he will score less than 7 points, which is a little disappointing, but he makes up for it with huge weeks. Based on the chart Calvin Johnson is as good as any other fantasy football player and a sure fire top ten pick.

Roddy White
White along with Johnson, Mike Wallace and Greg Jennings have been the most consistent WRs over the past two NFL seasons. While White is as steady as Johnson, the main difference between White and Johnson is that White produces much fewer 15-20+ point games. White will give you double digit points in 62.5% of his games, which is equivilent to 10 games per season. White is a good, reliable and consistent receiver. His numbers figure to go down a little bit this year due to the emergence of Julio Jones, that pushes him down the board a little bit in my opinion.

Mike Wallace
Wallace stood out to me on this chart. He has been one of the most consistent big point producers and will score you a touchdown every other game. While Wallace doesn’t go over 20 points often, he consistently produces 15 point games, due to his big play ability. In fact 65.6% of his games Wallace goes for between 10-20 points. For where Wallace is ranked Wallace might be the best WR buy in fantasy football. Some owners may be concerned about Antonio Brown’s emergence, but Wallace’s numbers remained steady in 2011.

Greg Jennings
If you are looking for a consistent point producer, who won’t necessarily win you a week by himself, your guy is Greg Jennings. Jennnigs has the lowest percentage of under 7 point games at 17.2%. Which essentially means that Jennings won’t score more than 7 points in only 3 games out of 16 game schedule. His touchdown percentages and completion percentages also stand out making him a must own player. Week in and week out Jennings will score you close to ten points or more. In the Packers offense, he is the safest WR to own, but he won’t put up the HUGE week like his teammate Jorday Nelson might have.

Dwayne Bowe
Bowe’s numbers on this chart are slightly skewed. The large majority of his points and big point production is from 2010. He came back to earth in a big way in 2011, so buyer beware. Bowe also has a large percentage of games in which he scored under 10 points, 68.75% in 2011 alone.

Wes Welker
Welker’s numbers were as expected. He is a consistent point producer who every now and then will have a huge point total. The problem with Welker is that every now and then he will be taken out of the game by an opposing defense and score a very low point total. When targeted Welker catches the ball 70.9% of the time, making him the best PPR WR and a solid standard scoring WR as well.

Brandon Lloyd
Despite playing with some unfavorable Quarterbacks Brandon Lloyd has been one of the best fantasy wide receivers the past two seasons. In more than half his games he has produced double digit points. Lloyd’s completion % is the lowest of the WR mentioned. Now that he has a Hall of Fame QB throwing him the ball, those percentages and Lloyd’s numbers will go up. After personally seeing him for one week in Pats camp, Lloyd is poised for a huge season.

Marques Colston
Colston is an example of an inconsistent WR. In 13.8% of his games he has scored over 20 points. But, the number that stood out to me is the 41.4% of his games with fewer than 7 points. He also has a low percentage of 15-20 point games, meaning he is likely to score you less than 10 points a week more often than not. I’m not a huge Marques Colston guy and I’m staying clear of him after these findings.

Percy Harvin
Harvin’s consistency the past two season surprised me. He has scored just under 300 points and averages just about 10 points per game. These numbers don’t included return points. If your in a league that gives you return yardage points, then Harvin is a player you want to target. His receiving numbers should be more consistent this year with Chrisitan Ponder the full time starter.

Jordy Nelson
Nelson’s percentage’s don’t tell you the full story. He was basically a non-factor in 2010. All of his big number games came from 2011 and yet his numbers still fit into the top tier of WR. Nelson is a safe bet to have the most 20+ point games this season and is a good buy in the 4th round.

Dez Bryant
Bryant is extremely enigmatic. It’s assumed that Bryant has been more productive than he really has. He has NEVER had a 20+ point game (the only WR in the study). Bryant will flash and then disapper. He scored less than 15 points in 85% of his games, and many of them are well under 10 points.

DeSean Jackson
Jackson has been one of the best big play WRs in the NFL the past 2 years and the numbers reflect it. His 27.6& of games over 15 points ranks him in the top 5, despite struggling at times to produce last season. Now that Jackson has gotten paid and Mike Vick is fully healthy, Jackson should have a monster year.

Pierre Garcon
Stay away from Pierre Garcon! In 63.3% of his games he scored less than 7 points and in many of those games far less than 7 points. He is now in an offense with a rookie QB and for how good RG3 could be this year he is going to struggle at times. Garcon is the epitome of boom or bust WR. He is bust a lot more than boom.