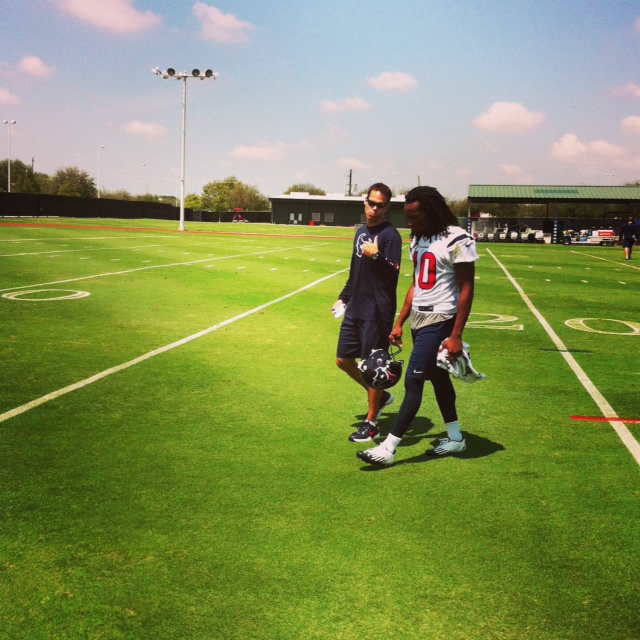 WR Deandre Hopkins has certainly made his presence known quickly in Houston. Hopkins came into rookie mini-camps completely looking the part and seeming comfortable with the general pace and sped-up timing of the pro game, albeit only against fellow rookies.

Here is RosterWatch’s video of Hopkins in some drills from mini camp:

There is no doubt the Texans need an eventual replacement for Andre Johnson (and an immediate need for a legitimate receiving threat opposite him) to get any return on the club’s huge investment in QB Matt Schaub. The organization must also take immediate advantage of a shortening window in which RB Arian Foster is operating at an elite level.

I emailed with Pat Starr of StateOfTheTexans.com who covers the team like white on rice. Having been at every camp and preseason event open to media through the summer, these were his thoughts heading into the exhibition games for fantasy purposes:

“I think WR Keshawn Martin and TE Owen Daniels will benefit the most from Hopkins being there.

I know Foster is a given but he should be primed for a solid season. FB Greg Jones and a new right side with RG Brandon Brooks and improved RT Derek Newton is serious.

BTW Hopkins is the real deal and SHOULD have more TDs than Andre.

Two horse race at RB #3 between Cierre Wood and Dennis Johnson. Wood has the higher upside but DJ is serious in space. ”