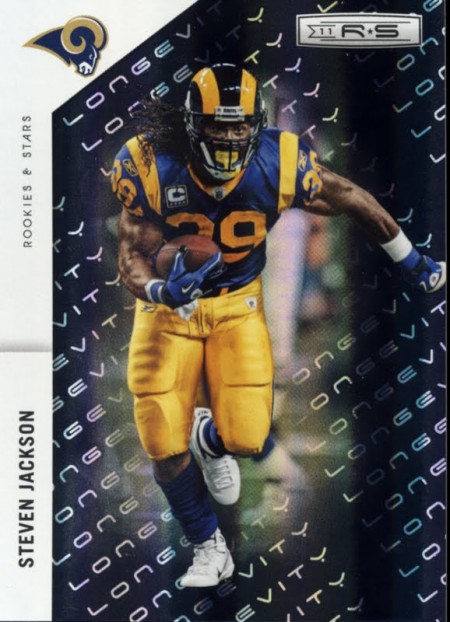 We currently have Steven Jackson ranked as our preseason #14 RB. Factor in at least 8 QBs and 15 WRs I am more affectionate for, and do the math. There are 36 players I like better than Steven Jackson as we head into the 2012 fantasy football season. That would make the Rams star RB the 1st pick of the 4th round in standard 12 team leagues.

This is a bit strange to reconcile for a player whom, over the years, we have grown accustomed to being drafted in the first two rounds. Is this accurate? What are reasonable expectations for SJAX this season? Coming into his ninth year, Jackson is definitely nearing the edge of the fantasy football cliff. Does he get pushed off in 2012?

Let’s start with the bad news. Steven Jackson is old and plays for the Rams. St. Louis plays the NFC North and AFC East as well as the 49ers twice this year. The Rams have a tendency to get behind early in games. In April, the team spent a 2nd round pick on the electric RB out of Cincinnati, Isaiah Pead.

On the good side of things, the stigma surrounding Jackson’s durability is a bit misleading. He has only missed two games in the last three seasons. Consistency is actually his strong suit. You can chalk up 1,400 total yards and 6 TDs annually. Count on him for 11 fantasy points/game. Heck, Jackson averaged 12 fantasy points per game last year in standard leagues and the Rams were really bad. He had 10 games where he scored over 11 fantasy points and 3 serviceable games in the 6-10 point range. That means 87% of the time his production was serviceable or better. One of those games was a 30 point monster that probably won his owners the week. He did have 2 stinkers and they smelled like rotten diaper eggs.

Speaking of rotten, I also like the arrival of Jeff Fisher. Yes, we’ve heard the rumors of service industry personnel being gratuitously “crop-dusted” somewhere along the banks of the Mississippi by the Rams’ new HC. Still, I think The Mustache will coach ‘em up good this season as he tends to implement a strong rushing attack.

Jackson is no longer a #1 fantasy RB. He is a nice #2 with upside. If the Rams have a resurgence, he will be sneaky good. I do see him as a 4th round draft pick. There aren’t a lot of surefire stud RBs though, so if you like Jackson and need a RB I can understand a 3rd round selection. He is one of the few “workhorse” backs left in the NFL. My advice, don’t let name recognition get the best of you. Be realistic and temper expectations and whatever you do, don’t let Steven Jackson be the first RB you draft in 2012.