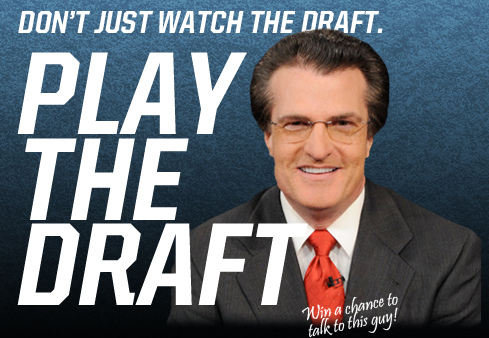 For everyone looking for some post-Final Four action, I wanted to let you know that we have teamed up with the folks at Mel Kiper’s “Play The Draft” game to create our own FREE league. (The game regularly costs $9.95 per person to play) We would love to have you join, and hopefully get a big group together.

The game is an interactive, premium stock-market like game in which you buy/sell “stock” in NFL Draft Prospects. It is super easy to play and really addictive, so beware. The game is run by Stats, Inc and is really cool way to partake in the spectacle that is the NFL Draft process in a fantasy-like game. The player will the most cash in their portfolio after Draft day wins.

So you think you know how the draft will unfold or which players are over/undervalued? Prove it! Play the Draft! See if you can beat us…
We’ll determine winners and prizes once we know how big the field is, but those placing at the top will most certainly receive premium fantasy football packages from Rosterwatch.com for the 2012 season as well as possibilities for joining us on air to brag about your dominance. If we get a super-big field, we might even be able to get you on the air with Mel Kiper.

Its free, no strings attached, no nothing. Kiper’s folks reached out to us with this idea to get the game some exposure through our various channels.

To enter our FREE private league, just email rosterwatch@gmail.com with “play the draft” in the subject. We’ll then send you an invite.

Tell your friends! The more players, the more prizes so lets do this.

Peace Everybody, and God Bless the National Football League.