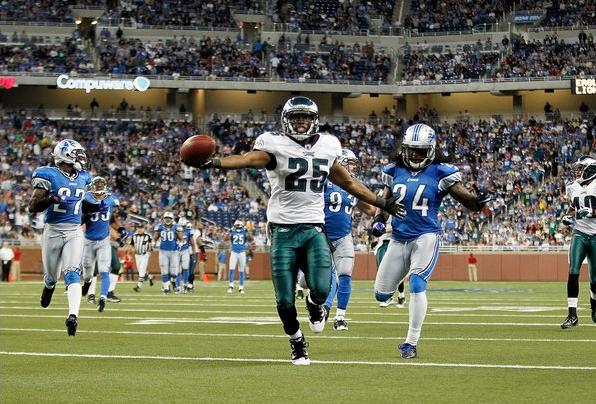 Traditional fantasy football draft strategies have almost always dictated drafting a running back in the first round. That will no longer be the case and this year will mark the transition away from that pattern. Running back by committee in the NFL has finally and completely infiltrated fantasy values. This has occurred in tandem with the rise of the premium QB. Be creative in the opening round this year, as I believe only about half of the first round picks should be running backs.

Certified Studs
Arian Foster – The #1 pick. The best fantasy option there is.
LeSean McCoy –  A touchdown monster. Dynamic. Durable. Consistent.
Ray Rice -Talented dual threat and workhorse. His offense limits his scoring potential a bit.
MJD– People doubt him and he is still sick. Tons of touches. Dependable and in his prime.

Freaks of Nature
Darren McFadden – HUGE upside. Could be the best back in the league if  healthy.
Chris Johnson – Might have lost a step but he is still CJ2k and still young. Came on late.
Michael Turner – Great floor with big touchdown upside.

High End #2’s
Matt Forte – Dynamic. Martz’s departure in the pass game. Michael Bush is a vulture.
DeMarco Murray – A poor man’s Darren McFadden. Not that poor of a man.
Marshawn Lynch – Finally reached his potential last year. Can you trust Seattle?
Beanie Wells – Could be elite. Needs to stay on the field.
Steven Jackson – A rare feature back. Old but still productive. Injury prone w/ upside.
Trent Richardson – He should be drafted as a feature back from day one.
Ahmad Bradshaw – No Brandon Jacobs. Count on 10+ points every week if healthy.
Ryan Mathews – Will get plenty of opportunities in a prolific offense. Must be durable.
Willis McGahee – Last year was a renaissance. Peyton Manning will create opportunities.
Frank Gore – Getting old. A productive three down back when healthy. Alex Smith.
AP – A freak that could be the exception to my 2 yr. ACL rule.
Darren Sproles – Mighty Mouse is unreal in New Orleans. A lot of mouths to feed.

Hit or Miss
Roy Helu – Nice upside. Dynamic player. I never trust Mike Shanahan.
LeGarrette Blount – Some people hate him, I don’t. Beast that has to quit fumbling.
Shonn Greene – LT is gone. Not dynamic but will get plenty of carries.
BenJarvus Green-Ellis – Doesn’t excite you but will get a lot of play in a solid offense.
Michael Bush – Could be serviceable in tandem with Forte. Goaline touches.

Playmakers with Question Marks
Fred Jackson – Previously a fantasy monster. He is 31 yr. old and coming off of injury.
Jamaal Charles – The 2 yr. ACL rule. Especially for a guy whose game is speed.
Reggie Bush – Great second half last year. I am still bitter and he is still Reggie Bush.

Roll the Dice
Peyton Hillis – I think he will have a solid role in KC and Charles’ health is no guarantee.
CJ Spiller – Has explosive ability. Former 1st rd. pick who is due. See: Fred Jackson
Felix Jones – An electric complimentary back when healthy. Durability is an issue.
Kevin Smith – Was great in relief duty last year. Could be stuck in a RB clusterfudge.
Mark Ingram – We saw glimpses. I think they try to get him the ball more in year 2.
James Starks – Plays in a prolific offense. Keep an eye on Ryan Grant’s FA status.
Donald Brown – I can’t believe he is on this list. He finished strong last year. Addai is out.