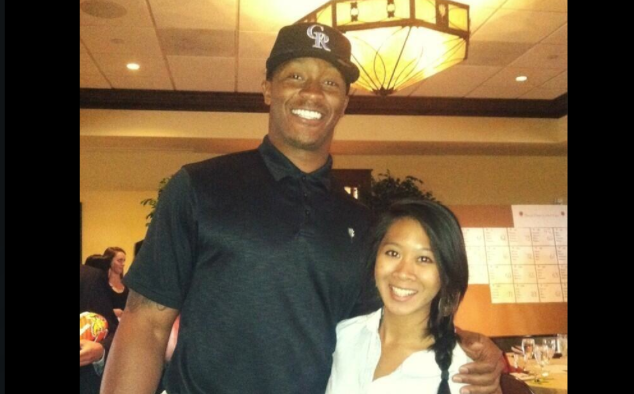 Photo via Demaryius Thomas Twitter
See how every fantasy WR ranked in our Premium WR draft tool with free membership.

A common conundrum amongst fantasy football drafters in 2013 redraft leagues is whether they should take WR Julio Jones of the Falcons or WR Demaryius Thomas of the Broncos.

The fantasy owners most likely to find themselves in this situation are those who draw early draft slots such as 1, 2 or 3. Generally, these players will make their second and third picks at the end of round 2 and the beginning of round 3 in snake formats, having usually made the selection of an elite running back in the first round.

To be clear, we here at RosterWatch do not like the value that either player presents at their current ADP (Jones 2.09 and Thomas 3.01). For our money, give us late-third round options such as Andre Johnson and Victor Cruz, fourth-rounders like Vincent Jackson, Larry Fitzgerald and Dwayne Bowe and fifth-rounders such as a sneaky-efficient Hakeem Nicks when healthy or Torrey Smith—now sans Anquan Boldin—in Baltimore.

Still, the question is Julio Jones or Demaryius Thomas. Two players seen as major “risks” coming into the NFL for very different reasons. The Falcons sold the farm to trade up for a sure-fire prospect in Jones during the 2011 draft while the Broncos in 2010 made the selection of Thomas, a raw athletic freak that came from a funky triple-option system at Georgia Tech and could not run routes.

Yet, those risks paid off for both teams. Here we are deciding which fantasy WR stud should be fifth off the board in 2013 leagues following Calvin Johnson, Brandon Marshall, A.J. Green and Dez Bryant.

We only have two years of data to weigh on Jones while we have three years of data on Thomas. Jones has had a steady, borderline-“elite” QB situation through his entire short career while that of Thomas has been tumultuous, at one point even involving Tim Tebow. Now, of course, Thomas’ production is connected to the arm and mega-computer dome of Peyton Manning, one of the best QBs in league history.

When looking at the numbers, it doesn’t make the situation any easier. 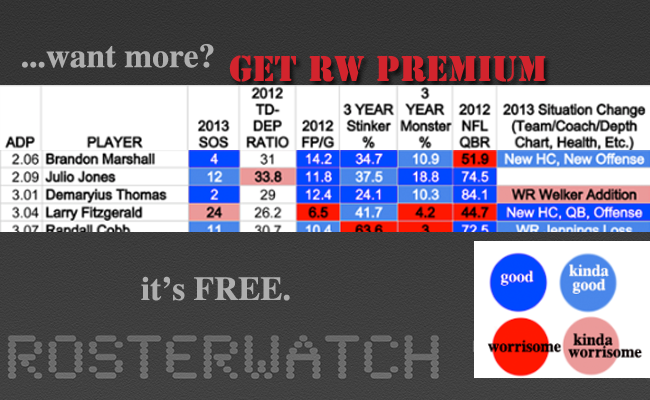 Thomas and Jones both have favorable schedules for fantasy WRs in 2013. The Broncos face the AFC West twice each and have the second-easiest strength of schedule for fantasy WRs coming into 2013. The Falcons have the 12th-easiest.

Both players depend a slight bit more on TD scoring than one would generally like, but Thomas is more dependable in this aspect as 29% of his fantasy scoring has been comprised of unpredictable TDs while Jones depends on them at a 33.8% clip.

Thomas was the better scorer in 2012 leagues, but not by much—barely outpacing Jones’ 11.8 fantasy points/game with his 12.4.

Then we look at the stinker games. The games that lose fantasy owners weeks during the season. These are the games where players score less than seven points in standard leagues, the basic area where a fantasy owner might as well have filled in the spot with a waiver-wire scrub.

Over their careers, Demaryius Thomas has put up a stinker 24.1% of the time while Julio Jones manages to really stink up the joint at a much-greater 37.5% rate.

Even though Jones has had the more stable QB play and seamlessness of system, Thomas is much more dependable. As our readers know, we value dependability greatly at RosterWatch. Jones will wet the fantasy bed for his owners a little more often than one out of every three games while Thomas will crap his pants a little less often than one in four.

As for uspide, this is where Jones is elite. Only two fantasy WRs—Calvin Johnson and Victor Cruz—put up fantasy monsters of 20-plus points more often than Jones’ 18.8% rate. Thomas has eclipsed the 20-point mark in only 10.8% of games.

We’re basically weighing here what we know about Jones’ situation vs. what we do not know about Thomas’. That is the competition for balls. The 37.5% stinker -rate that Jones carries around like a sack of trash is well-known to be the result of teammate Roddy White. The players tend to trade off “big weeks” and QB Matt Ryan is a smart enough player to know when a defense is trying to take one away. In these cases, the other will get fed. This much we know and can depend on in making our judgements. It is the downside that comes with the upside Jones most certainly brings.

Thomas’ situation is much more cloudy. The Broncos now welcome an absolute slot machine in Wes Welker to the fold, and at this point it is still unclear as to how Welker’s addition to the offensive arsenal will effect Thomas. Conventional wisdom would indicate that Thomas’ teammate Eric Decker is the player who stands to lose the most value with the addition of Welker, but the unpredictability of TD scoring situations and the idea that Denver is likely to be playing with lots of leads in 2013 give owners nightmares of red-zone swindles and run-out-the-clock second halves dotted with shallow crossing routes out of the slot, leaving Thomas high and dry on the outside.

We can only go on what we know. We know that Julio Jones will be a fun roller-coaster ride in 2013. Sometimes soaring to unbelievable heights, and sometimes making fantasy owners need to puke.

While we don’t know how Thomas will be effected by Welker, we do know how he has been effected by other drastic changes in the team’s offense and personnel throughout his entire career.

That is very little.

If taking a WR at the end of round 2 or beginning of round 3, we are more comfortable taking Demaryius Thomas.