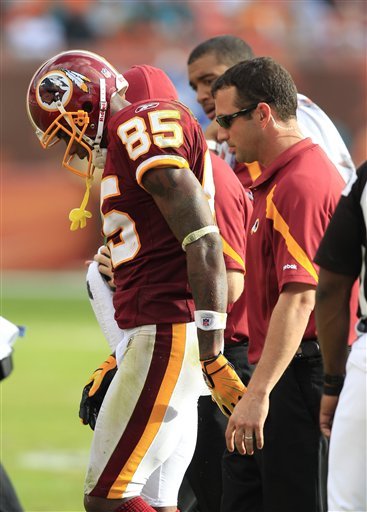 Last season, yours truly touted (then) rookie WR Leonard Hankerson as a candidate to break out in week 10 in my weekly Garbage Grab segment. That same day, Hankerson was going off against Miami for an 8 catch 106 yard  monster, when he strained his hip in the 4th quarter.  That minor strain turned out to be a torn labrum that required surgery and effectively ended the young man’s season. Fast-forward several months and Hankerson is on the mend and positioned to start at flanker opposite Pierre Garcon (who tends to disappear from time to time) on a newly invigorated offense led by wunderkind Robert Griffin III.  Mel Kiper’s No. 3 overall receiver in the 2011 draft, Hankerson has the skill set to become Washington’s no.1 receiver.  He averaged 16.12 yds per catch in 2010 and was a first-team All-ACC wideout alongside Torrey Smith, who happens to be pretty good company. Hankerson also has a nose for the end-zone, as he broke Michael Irvin’s single-season receiving touchdown record with 13 as a senior. His hands are a factor, and we don’t know when he’ll be fully healed, but I am putting Hankerson firmly on my draft radar. Chances are you can grab him while someone isn’t looking, but I wouldn’t feel guilty about reaching for him just a bit.