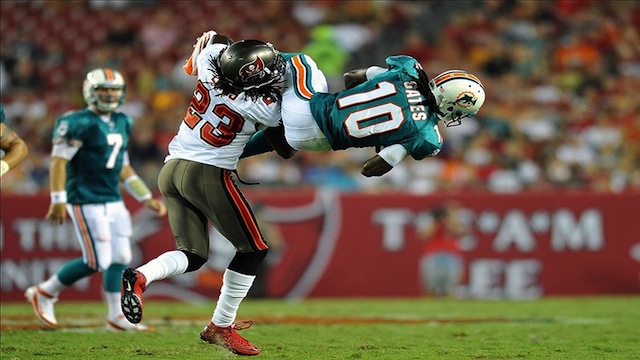 Second year Dolphins receiver Clyde Gates had the fastest time at the 2011 NFL combine, though there is a good chance this is the first time you’ve heard of him. Don’t be too hard on yourself, he was virtually nonexistent for Miami last season with a paltry two receptions for 19 yds. The story could end there, as there are plenty of talented players in the NFL who never make a dent, but Gates could have a resurgence in his not so distant future. I thought it quite odd that the Dolphins made little to no effort to bolster their receiving corps this offseason after losing Brandon Marshall (Legedu NaaNee isn’t exactly a suitable replacement). Their lack of concern in filling the position makes me think they believe they have a legit starter in Gates. According to the Miami Herald, the Dolphins expect him to compete for flanker opposite Brian Hartline. As it turns out, Gates played with a torn groin all season last year, and is fully healed now. The coaches’ belief in his skill is showing, as he was a major player in the Dolphins’ first minicamp of the off-season. If Gates can hold on to the job, he could be a major sleeper this year in fantasy leagues, especially if Tannehill can get it together his first year. Chances are you might be able to get away with not even drafting Gates and acquiring him off waivers after you see how he fares the first couple of games, but the prudent fantasy schemer would do good to take a flyer on him in the later rounds.