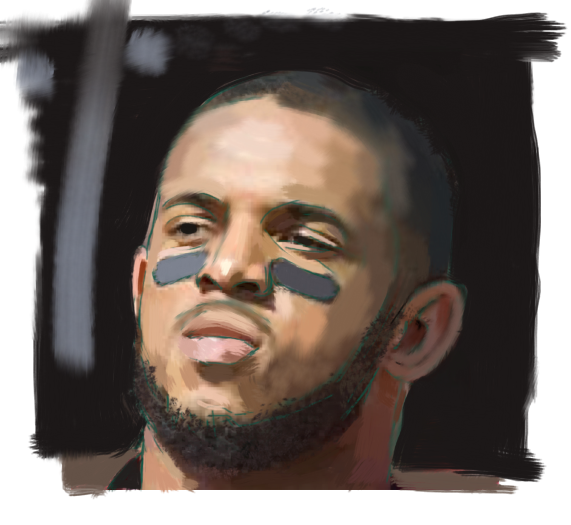 2011 Season
– Was suspended for the first 6 games of 2011 along with fellow Senior Bowler DeVier Posey for receipt of improper benefits.
– Ran for over 100 yards in 3 of 7 remaining conference games, and scored only 3 TDs.
– In his uninterrupted Junior Year, he scored 16 touchdowns and averaged 5.3 yards a carry as a bell cow runner.

Boom Herron is a tough runner with an unusual style. It took me three weeks of study to finally blurt out the comparison that was on the tip of my tongue every time I watched his film. When he slipped perfectly between the Penn State D-Line and LBs to perfectly execute a pro-style screen route out of the ace, it hit me: Tiki Barber. Boom Herron does not make a good first cut. He actually often looks like he is going to get stuffed due to indecisiveness in hole discipline. Sometimes he does. When he doesn’t, the result is usually impressive. For a “round it off” cutter in the backfield behind blockers, he displays amazing, fast (bordering insane) cutting ability at the 2nd level. It seems like he only feels he needs to make decisive moves and jukes once he is face to face with a defender. This style poses a stark fundamental difference to current NFL runners such as Darren McFadden and most notably DeMarco Murray, who both love to read their intial blocks and then “get sprung” by one key block, then its off to the races. To me, this style of running shows maturity and understanding of offensive philosophy. Herron’s style relies on natural ability throughout, which is a shame because he was playing behind an offensive line clearly capable of supporting an interior back of his caliber. I love Herron’s hands and think he may be best utilized in a system which uses him as a common extension of the run. Herron has endured some off-the-field issues which also call his maturity into question. I honestly believe that Herron has the ability and raw talent to be a featured back in the NFL eventually. What he is going to need to show scouts and teams on the field (and in interviews) this draft season that he is mature enough to understand that his game has inherent but fairly easily-addressed flaws. Again, we look at Barber. He learned how to make a decisive first cut during his first NFL season, and went on to be, well….Tiki Barber. Years later, the fumbling issue finally came to a head, at which point he successfully was able to transform his entire style to help in alleviating it. He learned to be coachable. We know Herron has the talent. We will get our first glimpse this weekend at the Senior Bowl as to whether an NFL level of adaptability exists within his explosive skill set.