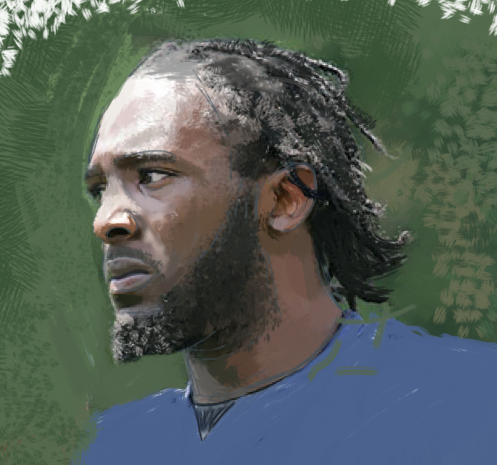 Tarheel QB Bryn Renner says Dwight Jones’s best route is the dagger route. Scouts love hearing that. I could give you a long explanation why, but here is the short explanation: If you have a complimentary slot receiver capable of drawing respect running inside vertical routes, you will almost always have the dagger open in the middle of the field. Versus Cover 1, Cover 2, Cover 3, 4- It will be open, most typically against 3rd down defensive packages. It’s the deep dig, and it takes a special kind of receiver to execute it well consistently. Dwight Jones did so over and over in 2011 without much of a surrounding cast to draw away coverage. (Coming into their bowl game, no Tarheel player other than Jones had more than 650 yards receiving.)  To run the deep dig, you have to have the ability threaten the DB vertically to create the space you need to cut in underneath him. What you’ll notice in watching Jones is that he doesn’t quit on the dig route. This is important. The most important part of the dig is the “speed cut” at the soft-Corner’s inside shoulder once the receiver’s route turns at a 90-degree angle across the field horizontally. The second most important thing is not quitting if you don’t get hit on the first read, which is optimal. Dwight Jones is the real deal, and at this point- It’s just a matter of how far his stock can elevate during the draft season. If you watch his film, you will notice that he does need to do a little bit of hands-work. You can tell he is almost there. He is not a natural hands catcher, but he is a natural ball catcher. Natural ball catchers can develop into great hands catchers with training, and you can tell he is very close. He also has the issue of the horribly thought-out New Year’s Eve/Birthday Bash that initially got his eligibility for UNC’s Independence bowl berth against Missouri suspended. (The suspension was eventually lifted, and Dwight Jones played like a sick man in his last game as a Tarheel.) We’ll have more coverage of Dwight Jones and others in person at the Senior Bowl. Stay Tuned.