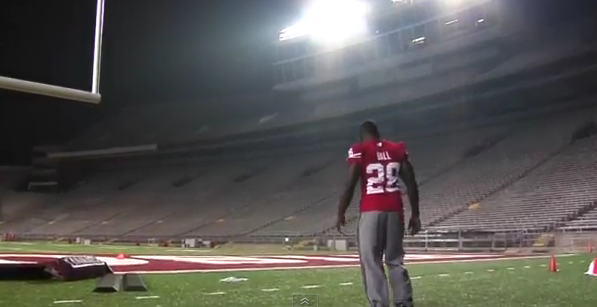 Rushed for an amazing 3,077 yards in a single season as a high school junior.
Scored 41 touchdowns as a high school senior.
Totaled 8,222 high school rushing yards. (Over 2,000 yards/year!)
107 career high school touchdowns.
Three-time All Academic Team Selection.
Two-time letterwinner in basketball (this explains the lateral agility that I reference below)

My first thought when analyzing Montee Ball is that he is a traditional running back that thrives as a North-South style runner behind a lead blocker, picking his holes, and getting positive yards. He loves the power game. It is a beautiful thing to watch.

While researching Ball, I found this audio from head coach Bret Bielema in 2009 describing his incoming freshman:

“ Montee comes to Wisconsin as a very decorated player. He was the leading rusher in state of Missouri history. He wanted to come somewhere and be a traditional tailback, where he can run downhill behind a fullback. That’s why he chose Wisconsin.”

That is exactly what he did, and is precisely why NFL teams should covet Ball. His game is old-school and tailor made to plenty of NFL rushing schemes. He comes to the league as a rare four year senior—and as an intelligent team leader with all of the production in the world to match.

Ball has a nice blend of power, speed, and balance. He runs with patience while setting up his blocks and carefully choosing the holes that he hits decisively. He uses his vision and lateral agility to successfully hit cutback lanes. Once in the second level, Ball can make a defender miss in open space or use his forward lean to finish defenders off with power. His balance keeps him from being taken down easily. These are also the qualities that make him so effective around the goaline (attributes that remind me of some very famous touchdown scorers…dare I say their names…I’ll let your mind wonder.) In his time with Russell Wilson, we saw that Montee Ball is adept in the receiving game, running nice routes and making hands catches. The Wisconsin pro-style rushing attack translates well to the NFL.

Not the explosive athlete that teams covet. Although well proportioned, he does not have ideal NFL mass in his lower body. He’s not physical enough in pass protection. He has a lot of mileage on the tires dating back to highschool. After a solid senior season, sans pro OLs Kevin Zeitler and Peter Konz, some are still concerned Ball is a product of his talented offensive lines. I believe this just mirrors the type of blocking he will get in the NFL, with the obvious caveat that the defenses will also be better. Which should still set up well for Ball.

Montee Ball will never be confused for Adrian Peterson or Trent Richardson, but neither will Alfred Morris or Vick Ballard. Montee Ball is a very good player and it is safe to say he will fall somewhere in that range as an NFL runner. His measurables and wear and tear will cause him to fall in the draft.

Where? He will be chosen by some lucky team on Day 2. He may not have ten great years in him—but really, who does? When things shake out many teams will look back and realize that Montee Ball was a more productive professional player than a third of the first round picks in the 2013 NFL Draft.